Summer League is drawing closer! Pitches are being marked and squads are deep into training! CCSL Summer League is filling fast and this year is set to be one of the best ever!

There are only a very few places left! So to avoid disappointment, get your application in NOW!

Another high scoring week in the summer league in week 3. On a Monday 4 teams still have a 100% winning record with Team Jansen having the stand out win racking up an 11-0 thrashing. Tuesday night was a mixed bag of results. 3 teams remain unbeaten across the 2 divisions and North Bristol Vets managed to get their first win with a fantastic 8-3 victory over Easton Cowboys. 4 teams in each division on a Wednesday are all within 3 points of each other making things very close at the top. Easton FC and Workout Bristol managed to get high scoring wins whilst UWE Dynamos managed a good win despite only having 7 men. The stand out statistic from the Thursday night divisions is that there are 4 teams who have scored more than 20 goals. Quite astonishing.

A great second week in the summer league. The leagues on Monday produced relatively few goals except the 9-0 win for Hangover ’96. Tuesday night managed to produce the first 0-0 draw of the entire league so far between Greenspark Rangers and CSV. 3 teams on Wednesday managed to keep their 100% start to the campaign rolling with 2 of them scoring 9 goals each! And last night had the pick of the week with last year’s runners up Long Ashton B managing to hit double figures with a 10-0 win. 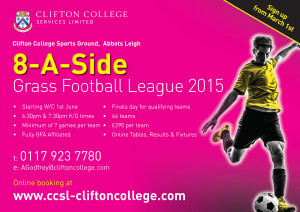 This years summer league will be open to the public from March 1st.